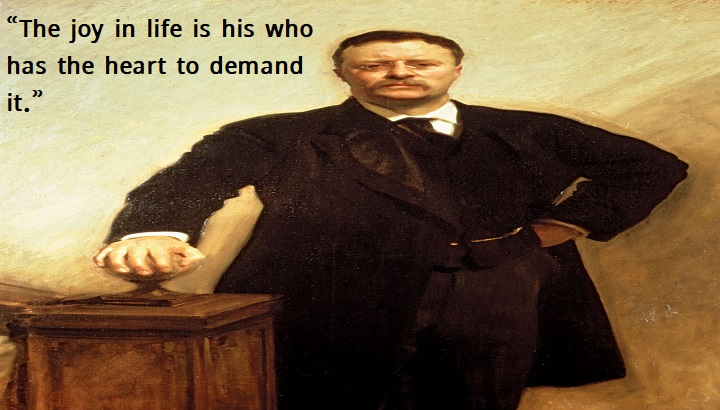 Check out the best collection of Theodore Roosevelt quotes. We’ve compiled a list of popular quotes on life, leadership and success.

1. “The worst of all fears is the fear of living.”

2. “Believe you can and you’re halfway there.”

3. “Keep your eyes on the stars, and your feet on the ground.”

6. “With self-discipline most anything is possible.”

7. “Far and away the best prize that life has to offer is the chance to work hard at work worth doing.”

9. “I don’t pity any man who does hard work worth doing. I admire him. I pity the creature who does not work, at whichever end of the social scale he may regard himself as being.”

14. “No man should receive a dollar unless that dollar has been fairly earned.”

17. “In life, as in football, the principle to follow is to hit the line hard.”

19. “The most important single ingredient in the formula of success is knowing how to get along with people.”

20. “I think there is only one quality worse than hardness of heart and that is softness of head.”

22. “I am only an average man but, by George, I work harder at it than the average man.”

24. “The only time you really live fully is from thirty to sixty. The young are slaves to dreams; the old servants of regrets. Only the middle-aged have all their five senses in the keeping of their wits.”

25. “Character, in the long run, is the decisive factor in the life of an individual and of nations alike.”

26. “Nothing worth having was ever achieved without effort.”

27. “It is hard to fail but it is worse never to have tried to succeed.”

29. “Courage is not having the strength to go on; it is going on when you don’t have the strength.”

30. “People ask the difference between a leader and a boss. The leader leads, and the boss drives.”

32. “Nine-tenths of wisdom is being wise in time.”

35. “Far better it is to dare mighty things, to win glorious triumphs, even though checkered by failure, than to rank with those poor spirits who neither enjoy much nor suffer much, because the live in that grey twilight that knows neither victory nor defeat.”

36. “Great thoughts speak only to the thoughtful mind, but great actions speak to all mankind.”

37. “It is only through labor and painful effort, by grim energy and resolute courage, that we move on to better things.”

38. “A man who has never gone to school may steal from a freight car; but if he has a university education, he may steal the whole railroad.”

39. “Get action. Seize the moment. Man was never intended to become an oyster.”

40. “The best executive is one who has sense enough to pick good people to do what he wants done, and self-restraint enough to keep from meddling with them while they do it.”

42. “Old age is like everything else. To make a success of it, you’ve got to start young.”

44. “Big jobs usually go to the men who prove their ability to outgrow small ones.”

45. “Obedience of the law is demanded; not asked as a favor.”

46. “No man is justified in doing evil on the ground of expedience.”

47. “The human body has two ends on it: one to create with and one to sit on. Sometimes people get their ends reversed. When this happens they need a kick in the seat of the pants.”

48. “No great intellectual thing was ever done by great effort.”

49. “It is essential that there should be organization of labor. This is an era of organization. Capital organizes and therefore labor must organize.”

50. “To announce that there must be no criticism of the president, or that we are to stand by the president, right or wrong, is not only unpatriotic and servile, but is morally treasonable to the american public.