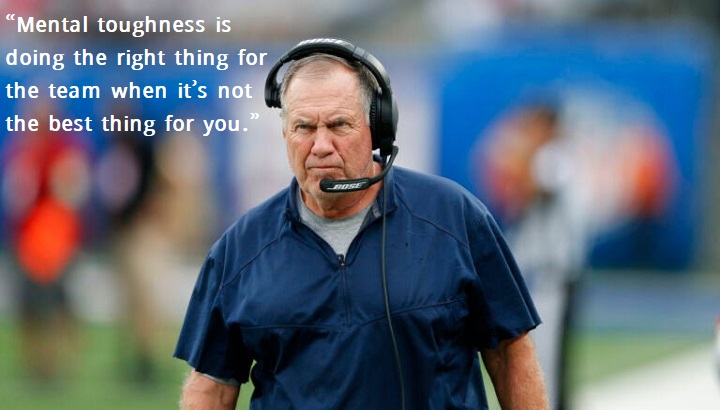 3. “If you sit back & spend too much time feeling good about what you did in the past, you’re going to come up short next time.”

4. “Mental toughness is doing the right thing for the team when it’s not the best thing for you.”

6. “We’ll continue to work hard to do a better job in every area going forward. I don’t know where those little things will come from but we’ll continue to be diligent on them.”

7. “For a team to accomplish their goal, everybody’s got to give up a little bit of their individuality.”

9. “There are no shortcuts to building a team each season. You build the foundation brick by brick.”

11. “I think that we’ll continue to try to look at ourselves in the mirror and see where we can do a better job, maybe where we can improve the process. But I think the fundamentals of the process will remain the same.”

12. “We’re always trying to do a better job on that and that’s what we’ll continue to do.”

13. “Mental toughness is going out there and doing what’s best for the team – even though everything isn’t going exactly the way you want it to.”

14. “My personal coaching philosophy, my mentality, has always been to make things as difficult as possible for players in practice, however bad we can make them, I make them.”

15. “When you get wet, it usually means something good.”

16. “Whatever success I’ve had it is because I’ve tried to understand the situation of the player. I think the coach’s duty is to avoid complicating matters.”

17. “Every game is an important game for us. Doesn’t matter what’s the next week – who we play, whether it’s a bye week, Thanksgiving, Christmas, Halloween, Columbus Day. We don’t care. We’re just trying to go out there and win a game.”

19. “The less versatile you are, the better you have to be at what you do well.”

20. “I think a good quarterback or a good linebacker, a good safety, even though you have a lot of bodies moving out there, it slows down for them and they can really see it. Then there are other guys that it’s a lot of guys moving and they don’t see anything. It’s like being at a busy intersection, just cars going everywhere. The guys that can really sort it out, they see the game at a slower pace and can really sort out and decipher all that movement, which is hard. But experience certainly helps that, yes.”

22. “I think everyone is a case-by-case basis. Whatever the circumstances are that come with any individual, they exist and you have to make a determination as to what your comfort level is with that person and the characteristics that they bring.”

24. “We have absolutely done as much work as we can on finding out things like that and we’ll try to get all the information that we can as that would apply to any current situation, which I can’t talk about.”

25. “I told you the one change we would make in the initial start level of the football pressure, but that’s really about it.”

26. “I am who I am. In the end, I feel that what I’m accountable for is doing a good job as a football coach.”

27. “I think it’s relatively easy to play defense against a team that can only do one thing. Unfortunately, that’s not what we’re talking about here with Seattle.”

30. “I’ve learned a lot about the process. I had no idea how the balls got from the officials locker room down on the field and so forth and so on and all of that. That’s not something I have ever thought or concerned myself about [on] game day. I’ve concerned myself with preparing and coaching the team.”

31. “It’s the business that you guys are in too. We try to get as much information as we can and make the best decisions that we can for the football team.”

32. “The only thing I can cheer for in Philadelphia is the national anthem.”

33. “Not all teams use the same tests and certainly those tests are far from being 100 percent as well. It’s part of the process.”

34. “We never use the condition of the footballs as an excuse. We play with whatever or kick with whatever we have to use and that’s the way it is.”

35. “I could tell you that in my entire coaching career I have never talked to any player, staff member about football air pressure. That is not a subject that I have ever brought up.”