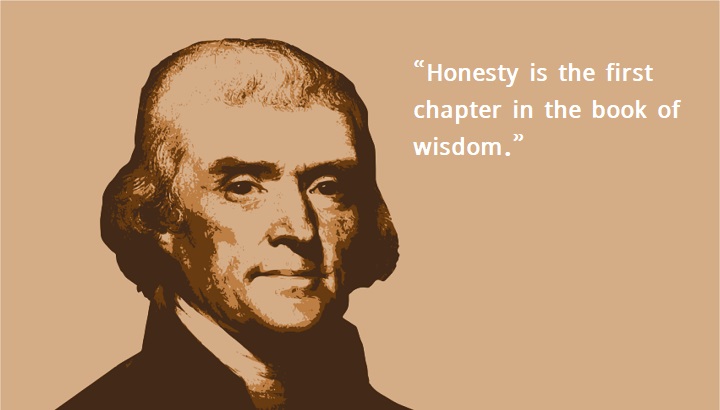 1. “Honesty is the first chapter in the book of wisdom.”

2. “I’m a greater believer in luck, and I find the harder I work the more I have of it.”

5. “One man with courage is a majority.”

7. “I like the dreams of the future better than the history of the past.”

9. “The happiest moments of my life have been the few which I have passed at home in the bosom of my family.”

10. “He who permits himself to tell a lie once, finds it much easier to do it the second time.”

12. “Every day is lost in which we do not learn something useful. Man has no nobler or more valuable possession than time.”

13. “When angry count to ten before you speak. If very angry, count to one hundred.”

15. “Do you want to know who you are? Don’t ask. Act! Action will delineate and define you.”

18. “I was bold in the pursuit of knowledge, never fearing to follow truth and reason to whatever results they led.”

19. “Don’t talk about what you have done or what you are going to do.”

20. “I predict future happiness for Americans, if they can prevent the government from wasting the labors of the people under the pretense of taking care of them.”

21. “The most valuable of all talents is that of never using two words when one will do.”

23. “He who knows best knows how little he knows.”

24. “How much pain they have cost us, the evils which have never happened.”

25. “Our greatest happiness does not depend on the condition of life in which chance has placed us, but is always the result of a good conscience, good health, occupation, and freedom in all just pursuits.”

26. “There is nothing more unequal than the equal treatment of unequal people.”

27. “I find friendship to be like wine, raw when new, ripened with age, the true old man’s milk and restorative cordial.”

28. “Truth is certainly a branch of morality and a very important one to society.”

29. “It is always better to have no ideas than false ones; to believe nothing, than to believe what is wrong.”

30. “Happiness is not being pained in body or troubled in mind.”

31. “Whenever you do a thing, act as if all the world were watching.”

33. “The glow of one warm thought is to me worth more than money.”

34. “It is error alone which needs the support of government. Truth can stand by itself.”

35. “Determine never to be idle. No person will have occasion to complain of the want of time who never loses any. It is wonderful how much may be done if we are always doing.”

36. “Do not bite at the bait of pleasure, till you know there is no hook beneath it.”

37. “A coward is much more exposed to quarrels than a man of spirit.”

38. “There is not a truth existing which I fear… or would wish unknown to the whole world.”

39. “He who knows nothing is closer to the truth than he whose mind is filled with falsehoods and errors.”

40. “My only fear is that I may live too long. This would be a subject of dread to me.”

41. “There is not a sprig of grass that shoots uninteresting to me.”

42. “Never spend your money before you have earned it.”

43. “In matters of style, swim with the current; in matters of principle, stand like a rock.”

44. “I hope our wisdom will grow with our power, and teach us, that the less we use our power the greater it will be.”

45. “Educate and inform the whole mass of the people… They are the only sure reliance for the preservation of our liberty.”

46. “Walking is the best possible exercise. Habituate yourself to walk very far.”

47. “We hold these truths to be self-evident: that all men are created equal; that they are endowed by their Creator with certain unalienable rights; that among these are life, liberty, and the pursuit of happiness.”

48. “No freeman shall be debarred the use of arms.”

49. “Where the press is free and every man able to read, all is safe.”

50. “I never considered a difference of opinion in politics, in religion, in philosophy, as cause for withdrawing from a friend.”

51. “Leave no authority existing not responsible to the people.”

52. “But friendship is precious, not only in the shade, but in the sunshine of life, and thanks to a benevolent arrangement the greater part of life is sunshine.”

53. “The boisterous sea of liberty is never without a wave.”

55. “Nothing is unchangeable but the inherent and unalienable rights of man.”

56. “Peace and friendship with all mankind is our wisest policy, and I wish we may be permitted to pursue it.”

57. “It does me no injury for my neighbor to say there are twenty gods or no God.”

58. “Nothing gives one person so much advantage over another as to remain always cool and unruffled under all circumstances.”

59. “Leave all the afternoon for exercise and recreation, which are as necessary as reading. I will rather say more necessary because health is worth more than learning.”

60. “An injured friend is the bitterest of foes.”

62. “I tremble for my country when I reflect that God is just; that his justice cannot sleep forever.”

63. “The tree of liberty must be refreshed from time to time with the blood of patriots and tyrants.”

64. “The care of human life and happiness, and not their destruction, is the first and only object of good government.”

65. “One travels more usefully when alone, because he reflects more.”

66. “Every citizen should be a soldier. This was the case with the Greeks and Romans, and must be that of every free state.”

68. “Rightful liberty is unobstructed action according to our will within limits drawn around us by the equal rights of others. I do not add ‘within the limits of the law’ because law is often but the tyrant’s will, and always so when it violates the rights of the individual.”

70. “Experience hath shewn, that even under the best forms of government those entrusted with power have, in time, and by slow operations, perverted it into tyranny.”

71. “It takes time to persuade men to do even what is for their own good.”

72. “For a people who are free, and who mean to remain so, a well-organized and armed militia is their best security.”

73. “No occupation is so delightful to me as the culture of the earth, and no culture comparable to that of the garden.”

74. “I believe that every human mind feels pleasure in doing good to another.”

75. “The most successful war seldom pays for its losses.”

76. “Friendship is but another name for an alliance with the follies and the misfortunes of others. Our own share of miseries is sufficient: why enter then as volunteers into those of another?”

77. “My theory has always been, that if we are to dream, the flatteries of hope are as cheap, and pleasanter, than the gloom of despair.”

78. “If a nation expects to be ignorant and free, in a state of civilization, it expects what never was and never will be.”

79. “It is neither wealth nor splendor; but tranquility and occupation which give you happiness.”

80. “Commerce with all nations, alliance with none, should be our motto.”

81. “We confide in our strength, without boasting of it, we respect that of others, without fearing it.”

83. “I am satisfied, and sufficiently occupied with the things which are, without tormenting or troubling myself about those which may indeed be, but of which I have no evidence.”

84. “It is in our lives and not our words that our religion must be read.”

85. “As our enemies have found we can reason like men, so now let us show them we can fight like men also.”

86. “I have sworn upon the altar of God, eternal hostility against every form of tyranny over the mind of man.”

87. “Every human being must be viewed according to what it is good for. For not one of us, no, not one, is perfect. And were we to love none who had imperfection, this world would be a desert for our love.”

88. “I never will, by any word or act, bow to the shrine of intolerance or admit a right of inquiry into the religious opinions of others.”

89. “Taste cannot be controlled by law.”

90. “Never trust a man who won’t accept that there is more than one way to spell a word Paraphrased.”

91. “I find that he is happiest of whom the world says least, good or bad.”

92. “The opinions and beliefs of men follow involuntarily the evidence proposed to their minds.”

93. “Money, not morality, is the principle commerce of civilized nations.”

94. “Wisdom I know is social. She seeks her fellows. But Beauty is jealous, and illy bears the presence of a rival.”

95. “Advertisements contain the only truths to be relied on in a newspaper.”

96. “Too old to plant trees for my own gratification, I shall do it for my posterity.”

97. “War is an instrument entirely inefficient toward redressing wrong; and multiplies, instead of indemnifying losses.”

98. “I do not take a single newspaper, nor read one a month, and I feel myself infinitely the happier for it.”

99. “Only aim to do your duty, and mankind will give you credit where you fail.”

We hope, you enjoyed our article about Thomas Jefferson Quotes. Above we have provided the most popular Thomas Jefferson Quotes for you. If you like this article. You can share this post with your friends and on social media. If you need more Quotes. Then let us know in the comment section. Thank you for spending time with us.